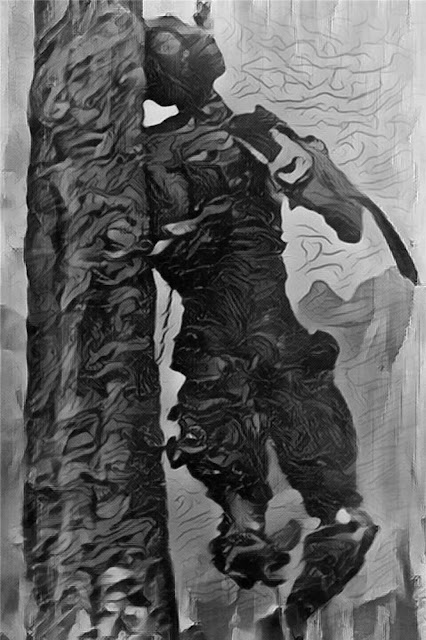 In May 1916, Jesse Washington, a seventeen year old black man, was arrested for the killing of Lucy Fryer, a fifty-three year old white woman. Washington would later confess to raping and killing Fryer. Wanting to avoid an attack on Washington while in custody in Waco, authorities in McLennan County sent Washington to a Dallas jail to await his trial. When his trial took place on May 15, 1916, Washington arrived back in Waco to a packed court room. Twelve white men formed his jury, and they found him guilty of murder after only four minutes of deliberation.
A mob had gathered around the courthouse prior to the trial and waited for their chance to capture Washington. After his conviction, the jailers took Washington down the back stairs of the courthouse, where the mob had been waiting. The mob of white citizens wrapped a chain around Washington’s neck and dragged him to city hall grounds, brutally stabbing and beating him as they went along.
A separate mob prepared a pile of dry-good boxes, which they ignited after they poured coal oil over Washington’s body. A crowd estimated to be between 15,000 to 20,000 people watched as the belligerents hung Washington from a tree and slowly lowered him up and down over the burning boxes.
After two hours of monstrously lynching Washington, the mob took his body and placed it in a bag and dragged it to Robinson, Texas, which was the hometown of Fryer and a large African-American population. The charred and mangled body of Washington hung from a utility pole in front of a blacksmith’s shop until a McLennan County Constable took his remains down and buried them. Washington’s unclaimed remains were later buried in a local potters field. The news of Jesse Washington’s lynching received national and international coverage. Horrific pictures capturing the violence and mob were taken by local photographer Fred Gildersleeve. He profited from selling these images as postcards and prints of the lynching were distributed globally.
Waco had seen another lynching previous to that of Washington. A mob had lynched an African American man by the name of Sank Majors in 1905. After a jury deliberated only three minutes in his trial, Majors was found guilty and two hundred men seized and dragged him to the town square, where they hung him from the Washington Street Bridge.
The lynchings took place during the time of the Jim Crow Laws in the South. These laws legally separated blacks and whites in numerous institutions such as schools, restrooms, and various types of transportation. “Separate but equal” had been affirmed by a 7-1 margin in the Plessy v. Ferguson case in 1896 by the Supreme Court of the United States.
The aftermath of the “Waco Horror” included a push to end lynching around the country. People began to see lynching as a barbaric act and started condemning those who participated in them. The NAACP led the charge in getting anti-lynching laws passed in light of the Washington lynching, which led to the decline of lynching after the 1920s and into the early 1960s. Lynching also had an effect on the arts. Billie Holiday released her song “Strange Fruit,” and in 1935, two art exhibitions were displayed in New York City, one of which the NAACP sponsored.
In 2001, the lynching of Jesse Washington became national and local news again when ABC News Nightline aired an eighty-fifth anniversary special. Four years later, Patricia Bernstein released her book, “The First Waco Horror: The Lynching of Jesse Washington and the Rise of the NAACP,” and it inspired the Waco community to call for local governments to apologize for the lynching. The Community Race Relations Coalition framed a resolution of apology, read it on the McLennan County Courthouse steps, and encouraged both the McLennan County Commissioners and Waco City Council to pass the resolution. After much debate over the word “apology,” and the word’s eventual removal, the McLennan County Commissioners passed a resolution condemning the lynching culture and mob violence of the past on May 23, 2006. The Waco City Council passed a similar resolution a little over a month later. Neither resolution included Jesse Washington by name.