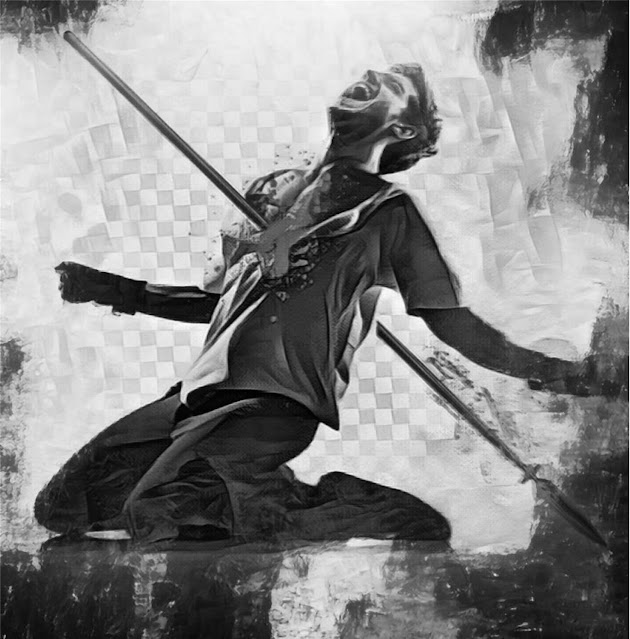 It didn’t look like much but as Dancy exited the combine, mask in place, he felt the tingle of standing on what was almost holy ground. Alonso came up beside him, hand on the butt of his .40 caliber pistol. In hushed, reverent tones, Dancy told him, “This is where the bug that bit our ass had some of its finest days.”

He waved a hand around them. “Near here was Los Alamos, the site of nuclear testing. See these buildings? Miles away they’d explode the bombs then come here to read the radiation levels and see how much damage the winds and sound waves had done.”

Alonso didn’t have his weapon drawn. “Take your gun out, dammit.” Need he tell these dummies everything? On the other hand, most of the men they’d faced were half-naked hicks from some burg in the boonies. Now they were facing, if anything, an unknown quality of foe. Was this phony town really as empty as it seemed?

A man ran up to him and gave his report. “Someone was here but it looks like they’ve gone.”

“Spread out and search anyway.” The order given, he turned back to his own inspection. Around the “houses” was an array of mannequins representing the population of a small town. “See the mannequins? This was supposed to resemble a town. There are cars, shops, even fake pets.”

The mannequins’ clothes had been blasted to rags and the occasional “dog” had long since been stripped of color by flying sand. Cars were pure rust.Two mannequins leaned against the open doorway of a building. Right as he was looking at them, a man flew past the window. Alonso, in quick-draw fashion, pulled his gun and fired as it swung back across.

It was the last thing he did. As Dancy was registering that plaster, not blood, rained out the window, a whistling sound went past his ear. Shocked, he watched Alonso fall to the ground, a spear protruding from his chest, quivering from the force of being thrown.

His eyes tracked about and saw a piece of the roof raised in blind fashion. A figure popped up and threw another spear that fell just short of skewering his leg. Dancy took aim and fired square in the middle of it. The blind closed and he heard a thump come from inside the house. Movement at the ground level caught his eye but he was already jumping back into the combine, ducking down so that just his eyes were above the level of the dashboard.

Two men came out of holes dug into the sand below the floor level of the house. Scarves covered their faces but he could swear he saw fur coats on their bodies. They threw their spears then ran, hands full of more of them. “What the hell?” Mary screamed. Just then the driver’s door flew open and someone snatched her out, quick as lightning. Dancy heard a scream, abruptly cut off.

Quietly as he could, he opened the door of the combine and dropped to the ground. With no regard for Mary, he fired the street sweeper at the feet and legs he saw. It took them clean off. A cry came from Mary’s attacker and a body fell. Dancy fired again and the man went still. Crawling to the other side, he stopped halfway there. It was a man, all right, but he had the face of a cat. “Motherfucker,” Dancy muttered, staring without belief at the still, furry face and body. Mary’s one open eye stared at him amid the ruin of her face.

He heard the tank truck start up and crawled forward to watch with fierce pride as it hit the house and leveled it. Removing his gas mask, for it dulled the hearing, he crept from under the combine and used it for cover. He looked high and low, his gun ready. Another of the furry figures ran toward the tank truck and he picked him off. That one had resembled a large, man-like hound.

The tank truck moved to the next house and drove into it, the cattle guard making solid contact. As it collapsed he could hear screaming coming from under the wood and they turned to sounds of pain as the tank kept going. It sounded like women and children.

A sound of shattering glass then the whoosh of flames came from behind him. Dancy turned and saw fire spreading across the steam organ of his combine. No! His beautiful machine. For a second he had to admire the genius that had created the perfect Molotov Cocktail, then rage made him bellow and come out firing, aiming at anything that wore fur.

Counting Alonso and Mary, six of his twenty troops lay dead. Firing, he ran through the battlefield that only moments ago had been quiet and peaceful. Whoever had planned this attack should be applauded. They’d caught him with his dick in hand. Cursing, he paused at the corner of a building and took assessment of where he stood.

The street sweeper was empty now and he cast it aside, drawing his pistol. Two shots were wasted firing at one of the cat things before he got it. His eyes took in the rain of spears but that wasn’t all they saw. From atop a building was an old-fashioned sign board whose faded paint could no longer be read. What he could see was a rifle barrel coming up now and then. He followed it with his eyes. The shooter hit two of his men with an accuracy he’d have admired under other circumstances.

Dancy took a bead and plugged the sign right where he judged the shooter to be perched. There came the sound of a body tumbling from the roof and landing on the far side of the building. “Haha!” he laughed, stalking out into the alleyway between buildings, making sure none of the furry things were about to stick him. He fired at one and missed, stopped and took more careful aim. The thing howled and dropped. Dancy fired again when he saw it was still kicking.

Licking dry lips, he rounded the corner to see what he’d killed. To his surprise, and not complete satisfaction, he saw the fallen body of Danna, sprawled in the sand with her hand still gripping a pistol. “No more singing for you, honey,” he said to her dead body. His gun clicked on an empty cylinder.

Then that dead body moved, sitting halfway up, arm levered perfectly. For the split second it stared at him, the eye of the muzzle looked wide as a well. He didn’t have time to register the flash of the bullet discharging or even feel it hit. Dancy looked down at his chest and noted the red of blood spreading across his shirt. Then he fell to his knees, mouth open in surprise.

How had this happened? He wasn’t supposed to die.

The ground rose up to meet him and sand filled his mouth. He smelled it, felt it caking his eyes. There was no light, no tunnel, no angel choir, none of that shit from poets and philosophers. There was only the consuming pain in his chest.

And now there was nothing.