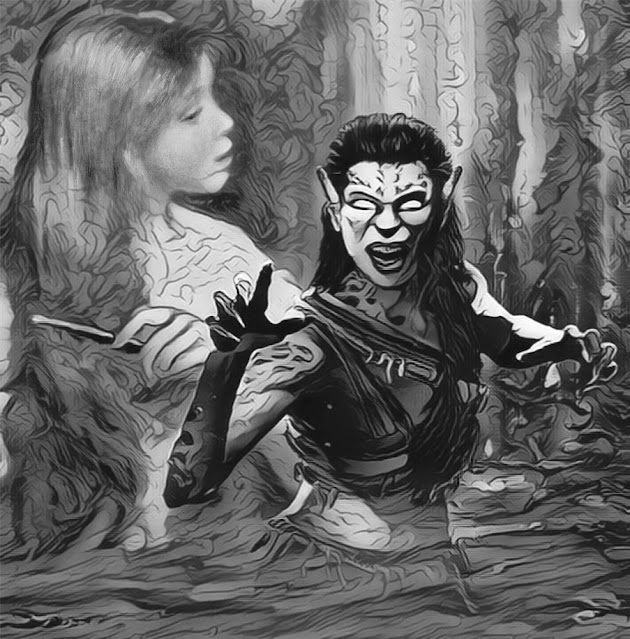 Pericles had once seen a sticker at the laboratory, a smiling, red-cheeked human boy wearing some sort of uniform, hand upright with three fingers extended. The words “Be Prepared” were underneath. It was fitting that he remembered this now.

He sorted through the spears they’d made and doubted their efficacy if humans came with guns. They had ends of sharpened wood only, hardened in fire. He took his knife and honed it until it was dangerous then worked to make the spears more deadly. He found the box that said X-Acto on it and took some of the little blades and added them to the end of the spears then set up a target outside to aim at. The little blade stayed fixed to the spear and when it landed with a satisfying ‘thunk’ he was relieved to see its accuracy and power was undiminished. If anything, it flew even better. Stuck better, too. When he retrieved the missile he saw the blade was bent, though.

A thought occurred to him and he stood debating with himself. His notion had merit but he didn’t know how it would be received. He went back into the warehouse to find Manda and Kellus. He was the war chief. Seldom though he was called upon to be, they took his advice on these things. He found Manda at work on one of the human skins, fletching fat and membranes. “Come with me to talk to Kellus.” She put down her knife and went with him.

They hunkered down together. “I want to ask Danna if she knows how to use a gun. If she does, it would be a great help in a fight against the humans.”

Manda looked at him as if he’d lost his mind but she waited for what else he would say. Kellus was a little more vocal. “Are you crazy? She’s human. Why would she fight her own kind? I don’t think it’s a good plan.”

Pericles patted the air with his hands. “Hear me out. She has no love for anyone coming to hunt the missing humans. They were going to kill her. I think she would join with us against them.”

“And what if she doesn’t?” Kellus asked, his eyes narrowed. “What if she turns the guns on us?”

Manda spoke up. “Why would she?”

“What?” Kellus exclaimed. “Surely you’re not considering this.”

“I am.” She nodded, her face thoughtful.

“Just because she sang to the children doesn’t make her a friend.”

“It doesn’t make her an enemy, either. The humans will kill her, too, if they find her here. She has the right to defend herself and I’d bet she knows nothing about throwing a spear.”

Kellus was unconvinced but he nodded in a reluctant fashion. “Fine. Ask her. If she doesn’t know how to fire the weapons we can leave them where they are.”

Pericles went to where Danna was still having her hair combed out and waited until they were finished. The golden strands were almost dry and fanned out across her shoulders, halfway down her back. Her hair looked soft and smelled better. She looked at him solemnly and smiled at Te when she said, “I haven’t ever felt human hair before. Well, I have, but not like this.”

“You saved the hair of those people you skinned?” Danna asked.

Kaside, the other cat-woman rose and said, “We try to use every part of everything we kill.”

Kaside put her hands on hips, her face proud and a little amused. “Skins are good to wear.”

Danna looked at Pericles for any hint of amusement. It was hard to tell when these animal-people were kidding. “You’re joking, right?”

He didn’t have time for delicacy or soothing her nerves. Pericles got right down to business. “Do you know much about guns?”

Danna looked around her at Te, Kaside and himself. Her lips curled at one end. “Hell, yeah.”

Without further ado, Pericles rose and went into the desert and dug up the guns. He brought them back to where Danna and Te were standing at the entry to the warehouse. Handing her the pistol, he observed her every move closely. She kept her hand on the handle of it and pointed out the parts to him. “This is called the butt. It’s where you hold it. This is the trigger guard. And this is the trigger. Never put your finger on it until you’re ready to fire.” She pointed to a small thing that looked like a tiny latch lock. “This is the safety. Whatever fool owned it had the safety off.”

She flipped it up. “Now it can’t be fired. Get it?” Pushing another button made something come out of the end of the butt which she handed to him. She flipped the safety off, put her other hand on the top of the gun and pulled it back. It made a loud click and something flew out the right side of the gun. “He had a round chambered, which means it was ready to shoot somebody if the trigger was pulled.”

Danna held it up for him to see, looking behind her to note the gathering, curious crowd. Parents were shooing their children back. Once they turned around to watch the gun safety lesson the children crept back forward and hunkered down to avoid notice, their eyes bright and wondering. “This is the magazine. It feeds the bullets up to the firing mechanism.” She took it and fed the ejected bullet into it then held it up for his inspection. “See how full it is? There are seven rounds in here.”

She handed it back for him to hold, pulled back a little curved piece in front of what she called the barrel and squinted down into it. It’s name was Hammer and she held it cocked back and pulled the trigger. Another click sounded. Taking the rifle, she did the same inspection, spitting bullets everywhere that he retrieved. “Hang onto those. I need to get the sand off the guns. Do you have some clean cloth and a straight, skinny piece of metal a couple of feet long? I need some oil, too.”

Pericles looked at Te and she nodded, hurrying away. She came back with a few thin rags, a straight curtain rod with a hole in either end and a pot of fat. Kellus and Manda were front and center, watching as she took the weapons apart for cleaning and oiling then re-assembled them. She fed the bullets into the magazines and flipped the safeties on. Then she held the guns out to Pericles. “There ya go.”

He looked up at Kellus and Manda. The chief woman nodded, satisfied. Kellus spread his hands out as if to say, Who knew? “You know how to shoot them, too?” he asked Danna.

“Since I was a little girl.”

He looked her in the eye, employing everything he knew about detecting lies. “If the humans come here, can we trust you to use these guns against them and not us?”

He could tell the question irritated her. “Of course you can!” She huffed in exasperation but then controlled her pique. “Look, I know you don’t know me from Adam but I have nothing for Dancy or any of his thugs. I’d rather shoot myself than be taken back to Dirty Town. I’m with you,” she said, a finger going between them to indicate her solidarity.

Pericles felt a great relief. Now they could use the guns. They’d be far more effective than spears. “How many bullets are there? Eleven?”

“A full magazine in the nine mil. The rifle has four. So you have eleven shots.”

“No. You have eleven.” He saw her smile again. With all the dirt washed away the bruises on her face were more pronounced but they didn’t make her less appealing right at that moment. “Who is Adam?”

Instead of answering, she laughed and walked away. Getting no reply pissed him off. When he took notice of the gentle sway of her hips he forgot about being mad. Instead, he wondered how she’d looked rinsing off, naked under the sun.