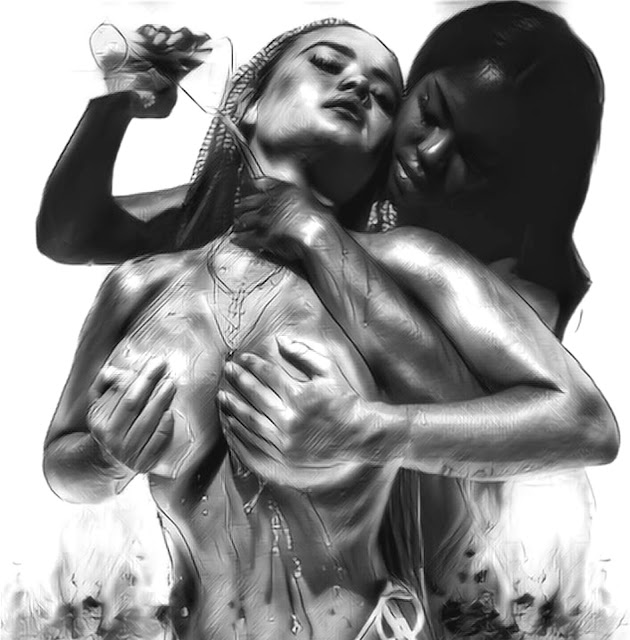 Lionel hung back when Sasha followed the giant, muscled man past the crowd into another room. She couldn’t understand why. He found her. They were together. Wouldn’t he want to keep her safe? Had she misread him? She didn’t misread what happened between them. She knew that much for sure. She could still taste him in her mouth. Thinking about it made a hunger rise in her that almost caused her to change forms right there. Sasha wasn’t aware that could happen and was startled by it, and more than a little embarrassed.

The new room was a library, and a magnificent one. It was all lavish purples, the carpet and drapes. There was gold trim and she thought to herself that everything looked like silk, aside form the books of course, and boy where there books; she had never seen so many. Sasha loved reading. It was her salvation for a long time. When you don’t fit in with the other people in your community, even if they don’t know you’re different, you still feel like an outsider. You just can’t relate, can’t express yourself. Isolation is inevitable. Books made her not feel alone.

“You’re welcome to read any of these you want, whenever you feel fit,” the enormous man told her and that made Sasha smile with delight. He mirrored the gesture and offered her a seat. The chair looked more like a throne to her, violet pillows and golden legs and back, real gold too, not gold painted wood. She ran her hand over it to make sure. The man watching her smiled again. “Yes. It’s real. There is much that has been passed down for generations. Some of our ancestors, yours included, lived quite luxurious lives.”

“How is this in here?” Sasha asked him. She was trying to focus on the beauty of the room instead of the beauty of the man. She wanted to remain faithful to Lionel, at least for now, and just looking at the man before her made her want to touch him. She could only imagine him in his true form. He had to be absolutely majestic. “The outside looks like a warehouse, but this is like something out of a mansion.”

The big man nodded his head. “It’s a facade, necessary to keep us from receiving unwanted attention. You have much to learn, and I’m afraid there’s not the luxury of time as some of the others have had in the past.”

“Why not?” Sasha almost sighed with relief when the behemoth of a man sat behind a desk nearby. “Wait. I don’t even know your name.”

The man took a deep breath. “My name is Martin. Lionel and his brother Theodore are my sons. I am the alpha of this pack, your pack.”

Sasha’s head was spinning. Things were going too fast. She was glad to find another like her, to even know there were others, but she didn’t want to be forced into a pack. She wanted to join one by choice, to be in control of her life. She felt like snapping on Martin and telling him just that, but she bit it back, wanting to hear what else he had to say.

“You knew my name and I just got here,” Sasha said out loud as she realized it.

Martin gave another nod. “I found out about you recently. Well, Delia did technically. She’s quite the spy. You’ll meet her eventually. She is one of my scouters. There jobs are to find others, and then I devise a plan to bring them in. I sent Lionel to lure you back.”

Sasha was taken aback by this. She felt mortified, disgusted, enraged. She stood from her seat, shaking with adrenaline. “He knew? You sent him? Your son is an asshole. I thought we had something. He’s the first man like me that I ever met. He made love to me. It was all a ruse to bring me back here, to make me join your pack? Well I’m not. I’m leaving, right now.”

Martin jumped. He cleared the desk and her, sending a flurry of papers into the air. Then he landed in front of the door. “I’m afraid I can’t allow you to do that,” he told her. “I understand that you are upset, but if you sit back down, I will explain everything to you.”

Sasha knew that she couldn’t get past a man his size. She was also now painfully aware of how his size took nothing from his speed or agility. She could see why he was the Alpha. She was still angry, still bearing her teeth and showing her fangs to him. He waited patiently for her to relax and sit. Then he walked back to his own seat, picking up the fallen papers as he went.

“Lionel’s mission to retrieve you said nothing about mating, Sasha. He also doesn’t mate with everyone he recruits, at least not to my knowledge. Maybe the two of you do in fact have something. That is for you and him to discuss and figure out. It has nothing to do with why I wanted you here, however, and I need you to stay here with us, even if you want to castrate my son with your teeth.”

Sasha sighed. “You know, I have a home and a life. You want me to abandon all of it. Just like that. Go ahead, Martin. Explain to me why I should.”

“Our kind is in terrible danger, Sasha, and I don’t just mean wolves. I mean all shifters.”

“There are others?” Sasha asked, wide eyed.

“There are many,” Martin answered. “Cats, bear, boars, birds like hawks and eagles, even reptiles like crocodiles. Most shifters live in groups, packs like ours, but there those, like you, that live outside of the norm, unaware of the options that exist for them, the sense of community that awaits.”

Sasha started rubbing her face. A day ago, she thought she was lone in the world, a weirdo monster disgraced to live with this curse, hated by her own family. Now today she find out all of this. It felt insane, impossible, yet somehow she knew that every word of it was true. Well, everything except the parts about Lionel, but Martin was right, she would deal with him personally on that in her own time.

“What is the danger?” she asked.

“There are shifters we call the Dark Born. They have evil in their hearts. There has been several accounts of them over time but they were alone, one power hungry person that did their damage and then got taken down. Things are different now though. The Dark Born have found each other, formed a pack of their own. They are unimaginably dangerous.”

Sasha shook her head. She was an editor for a woman’s magazine. She worked from home and sipped coffee in the daylight and whiskey at night, with wine in the bathtub. Now she was part of a pack of wolves and there were other packs and other animals and some of them were evil and somehow a danger to her. This was all too much. She could barely wrap her head around it.

“Why are they so dangerous, Martin? The dark ones.”

“Dark Born,” he corrected. “They are shifters who have learned that if you eat the heart of a different shifter, you can then take their form. It takes a ritual and some very dark magic but it is true. So they aren’t satisfied with the two forms they already live in. They consider forms as currency, wealth, and they want to be the richest of all. Each one of them seeks to find one of every kind of shifter, so they can reach their maximum potential. Some of them have already began and can take multiple forms which makes them formidable adversaries to say the least. With people like them out there, no one can be alone. The Dark Born would have found you just like Delia did. You wouldn’t have stood a chance by yourself, but here we can stick together. We can keep you safe.”

Sasha sighed and leaned back in the chair. Even with everything, she still marveled at its comfort. “This is a lot to process,” was all she said.

“Of course it is,” Martin said, standing from the desk. “Just give it time. Everything will be okay in time.”

With that he walked around her and exited the room. If there was any moment Sasha had ever needed a drink, this was it. She imagined someone trying to rip her heart out and she shivered. How had her life turned so completely upside down?

The door to the library reopened and drew her attention. Sasha turned in her chair expecting to see Martin again. She intended to ask him if there was a bar in this covert mansion of his. It wasn’t Martin that had come in though.

There was a woman walking towards her with a sultry swagger. She was completely naked and entirely unashamed. Her flesh was the color of hot chocolate and glistened under the lights of the library. She was all curves with thick thighs and wide hips, accentuated by her small waist. Sasha didn’t know what to think. She just stared at the oncoming woman, blinking.

Sasha had never been with a woman before but allowing her eyes to drink up the female specimen before her, she couldn’t help but wonder what it would be like. She wondered if the woman could tell what she was thinking, how she was feeling, and suddenly she felt ashamed.

The woman’s thick full lips parted to display a smile of perfectly white teeth. When she spoke, her voice was a sensual hoarse whisper. “Don’t feel bad about it, honey. I’m all woman, and those fantasies of yours would probably actually pale in comparison to the real thing. I would rock your world.”

Sasha’s eyes went wide. Her mouth moved for a bit before remembering how to make words. “I wasn’t - I didn’t, I mean…I wouldn’t even know how to fantasize about that. I wouldn’t know where to begin.”

A pink tongue licked at that plump luscious lower lip. Then the woman smiled again. She stopped in her tracks before Sasha in all her nakedness, breasts at eye level. She saw and obviously took pleasure in Sasha’s gaze lingering on her erect nipples. Then she said, “I’m definitely going to have to give you a lesson on where to begin sweetheart, but first we need to talk, and we can’t do it here, so I need you to come with me.”