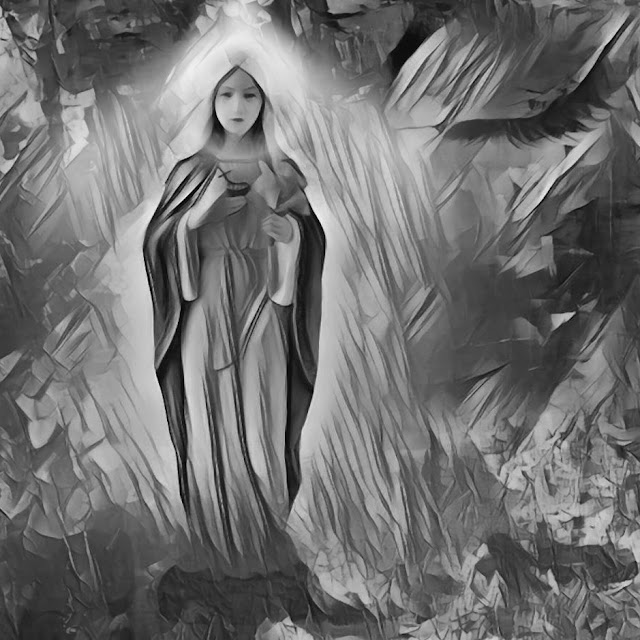 It was already a quarter to ten when I looked at the time flashing on my computer screen. Usually my work hour starts from 8 am until 9 pm. I was working overtime on developing, cataloging, and classifying library resources to ensure that library services meet the needs of the students. It was my second school where I was hired as a librarian. It was also a private school just like my first one; the only difference was that it was a catholic school. I was content with my job, and both the facilities and the work itself passed my standards of an idyllic workplace. I had my office and was satisfied with my salary because it was bigger than my previous one. My colleagues and other library staff were also easy to work with. I thought to myself that I was lucky enough to provide my own needs while working comfortably.

Just as when I was about to leave my office I was greeted by the silence of the concrete walls. Time ran so fast that I was oblivious that I was the only person left in the building. The library staff was gone as well as the students who usually come for studying and research for their night class. It was a two-story library; I was on the first floor of the inquiring station. It had an open ceiling so the second floor and its academic section were still in view. The edges of the bookshelves were already dimmed except for the entrance and the small altar located beside the fiction section on the first floor. Red lights highlighted the image of a Virgin Mary. Mounted on a circular platform it was a statue of the sacred heart standing more than five feet, dressed in a red robe and navy sparkling brocade. A flaming heart with divine light was pierced by a lance-wound, bleeding, and encircled by a crown of thorns and surmounted by a cross. I am not an atheist but I could not stand looking directly at it, especially its eyes, which I thought were very empty, much like a void in space. I’m not very religious but I do still recognize the presence of an Almighty, or even the devil; the existence of paradise and a pit of fire or heaven or hell. On a most unfortunate time my brain started to recall the hauntings shared by my co-workers about the place. Stories of hearing disembodied voices, occasional books falling off the shelf, chairs, and tables being disarranged or hearing mysterious footsteps on the upper floor. I had no idea if the building had a reputation of curse and tragedy within its scope for it to summon encounters, or even enigmatic human forms. If it does I should leave, I thought to myself.

Walking on to the main hall towards the exit I remembered that I was not able to turn off the light in my office. Despite the hesitation, and of being skittish, I returned, reminded of my obligation to ensure the conservation of the power used by the facility, not wasting the library’s budget. Just as I killed the light the place suddenly turned cold. I then heard the silent hissing of air from one of the floor-mounted air conditioners of the library. It was on and was near the altar. My fear switched to irritation, thinking that the library staff left without checking the place. I tried to switch it off but it wouldn’t.

In the corner of my eye, within my peripheral vision, I saw the head of the statue move. The frantic emotion earlier came back, juddering my bones and flesh. I looked intently at the face of the Virgin Mary; the head was not tilted nor was the body moved. But there was something about its face. It was smiling. I was not sure if it had been smiling all along. Suddenly, someone at my back tapped my shoulder. I looked back and saw nothing. The air conditioner continuously whispered cold air, this time more violent, breaking the deafening silence of the building. I was paralyzed by my position. I couldn’t move and I couldn’t feel my limbs. I couldn’t even feel myself running out of the building. I looked at the altar; the statue was gone from its circular asphalt. All the lights started to flicker. Books started to fall from the shelves, chairs and tables moved like something was moving them with cosmic force. There was a loud clanging on the upper floor; footsteps running from one place to another. I couldn’t believe what I was seeing. Things just like what I watched in a horror movie or what I read in horror novels or magazines; sheer terror was happening in front of my pale and chiseled face. I wanted to seek refuge, a path to escape, or a place to hide, but there was none. Instead I saw a silhouette of an entity coming out of the dark narrow paths of the bookshelves. It was just like the icon of the sacred heart, but instead of its smooth and cemented body the thing that stood out from darkness had an unattractive thin body with a face full of pockmarks. Its eyes were bloodshot as red liquid gushed furiously from the eye sockets. It walked slowly, masking a neutral visage of grim horror before it returned to its place above the circular platform before my shivering being.

I was wet from too much sweat and tears due to the fear. I bowed down on bended knees, trying to utter a prayer. The only prayer I knew; an unalloyed gesticulation of a human being seeking the presence of the Father. I closed my eyes, so hard that I could already see colors in my view of darkness.

“Our Father, who art in heaven, hallowed be thy name; thy kingdom come, thy will be done, on earth as it is in heaven. Give us this day, our daily bread, and forgive us our trespasses as we forgive those who trespass against us. And lead us not into temptation, but deliver us from evil. Amen.”

As I finished my prayer my ears could hear the silence again. No more loud banging sounds of things falling and moving on its own. No more howling voices from the concrete walls. Everything was over in my mind, and I opened my eyes slowly. It was blurry at first, but I then saw with vividness what was in front of me.

With a voice dug from the grave the entity’s face leaned in closer to mine, uttering everything I said from my prayer, reciting it in a different language, while its saliva splashed furiously from its mouth of  rotten teeth -- eyes wide open with a pinch of a grin from its lips.

Mocking my mortal being.