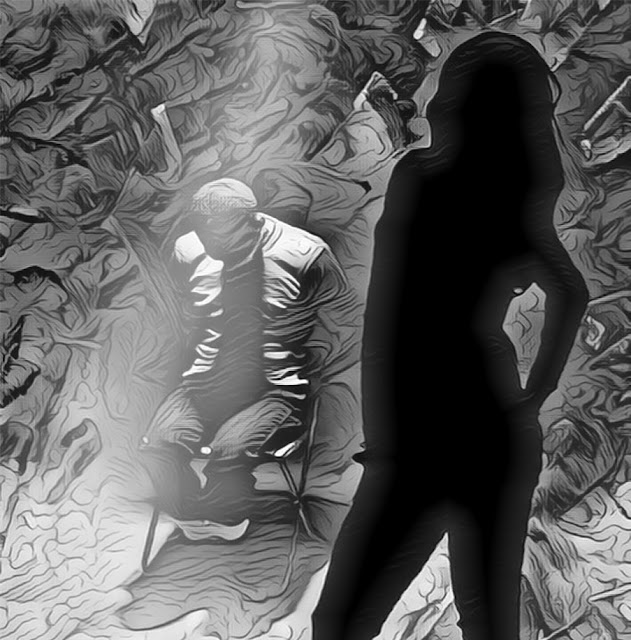 Waking up to an old rustic table with my head buzzing and wrists tied around the back of a chair probably meant that my business proposal wasn’t received well. That is if I even proposed anything. I can’t remember how I came to be here in such a dire situation. In fact, I don’t even know where here is. It could be due to my blurred vision, but I barely make out three silhouetted figures sitting about the table. Before I can even attempt to yank my hands free, one of them makes a snarky comment seemingly at my expense.

“He’s a lobster waking up in a pot of still water, isn’t he?” a feminine voice starts. “Shall we begin? I think we’ve waited long enough.”

“I hate shellfish. Don’t reference crustaceans, if you please,” says another.

With my eyesight improving, I can make out the bar to the far left, empty of patrons. Then, oddly, I catch a smell of some sort of wild animal emanating from the next seat. This whole thing is wrong. What have I gotten myself into this time? Am I a hostage?

“Mr. Howard, you, if you haven’t guessed, are in quite the proverbial pickle,” the same masculine voice proceeds with the hint of some sort of suave accent. “Tell me, how long have you been in the business of being a loser?”

“Someone who steals the identity of others. That’s who you are. A thief. A scoundrel that hides behind a virtual swamp,” he elucidates. “That’s how the world sees you. But, in this company, we see you as something far simpler than that. Do you know what that is?”

Adjusting my eyes, I ignore his cryptic question and perceive the grungy, hulking man to my immediate left. His tattered denim jacket and impatient scowl strikes a chord of terror within me. He glares on with a dark countenance, as if I was more than just reviled. It felt like I was his prey sitting helplessly with my hands bound. I then smell that animal scent again, something like a stray dog. And yet, the apparent leader of the trio snaps me back with a comment that drops me into an even deeper level of fear.

“To us, Mr. Howard, you are simply meat.” His piercing eyes reach across the table and into my soul when he says it. Despite his handsome features, there was a malevolence hiding in plain sight. Somehow, he appears to operate above the rules of the natural world, suppressing his baser instincts better than the other one closest to me. And while they exhibit grossly different demeanors, it suddenly makes perfect sense that I would be on a menu. But that couldn’t be.

Breaking the petrifying silence, I utter nervously, “Look—look, if this is some kind of prank, some sort of gag, you win. They win, okay? Whoever set this up, good for them, but I’m done. I’m done now, so let me go and have all your laughs!”

“Laughs? Well, this isn’t exactly a funny occasion, Mr. Howard. It’s more about business. Something you know quite a lot of nothing about,” he says with a progressive scowl. “You see, my partner Muncy here and I are familiar with the dark web, even more than you. If truth be told, we rely on it to post our fun little ‘dinner meatings’ as we’ve grown to call them. We’ll host at least thirty guests tonight and you’re the main course.”

“Main course? You’re not serious!” I cry out in terror of the prospect of being cooked and eaten by some sick cannibals of the underworld.

“Telling you this is just something of a courtesy we’ve come to do after all these years. It’s only right that you be permitted to say your last words or prayers or whatever,” he crosses his legs nonchalantly as if he is taking the time out of his busy day to let me plead for my life. He strokes his tailormade tie as he awaits my response.

Suddenly, the animal-like Muncy grunts, “Well, do ya’?”

“Have any last words, idiot?”

My heart was beating so fast I could hear the blood in my head. Breathing erratically, I try to say something but no words come out. Hell, I don’t even know what I was trying to mutter anyway. My very life starts to flash before my eyes. The eloquent maniac across the table smirks as I writhe in dread.

“Oh, Hector, let’s play the identity game. I mean, he can hardly breathe,” the woman with the librarian eyeglasses and pantsuit breaks in. “He’s an identity thief, right? It might be a fun challenge for him to guess ours.”

Muncy growls, “He’s a bumbling doofus. He can barely—”

“I’ll play! Whatever, sure, I’ll play it!” I call out frantically if only to live a bit longer – or for good with any hope.

After what feels like an eternity of the evil trio deliberating my fate, Hector finally declares chillingly, “Wanda never misses a good opportunity to play games with our meals. So, if you’re up for a little sport, we can fit in a lightning round. Only if you’re interested.”

Hector grins spiritedly while saying, “Mr. Howard, monsters have been a part of the human experience since the whole experience started. Except, the irony involved is often lost on every human being. For instance, let’s look at you. You’re a stealer of others’ identities. I called you a thief earlier and, with no mistake, you are. Yet, you’re really a shapeshifter, or a mimic in the monster world. And, in all honesty, this is the monster world, isn’t it? Humans have to create the very idea of monsters to hide the reality that they are the monsters.

“So, as to not diverge from the road to perdition, it’s your turn to label us for what we are in this world. And, as Wanda put it, you are the thief of identities after all. We’ve classified you as what you are. To save your life, use the skills of your predatory impulse and classify us for what we are. Do this successfully and we’ll let you live. You have our word.”

It’s the hope I need. Even if it’s just a sliver, it could be enough. My one chance of getting out of here alive will depend on their game. I can’t be the one to argue with them. So, I play along.

Muncy snappily barks, “We gave you our word! What else do you need?”

“No, no, Munce. It’s right for him to doubt us,” Hector interjects. “Such a monster isn’t used to dealing with others in its vulnerable state. Mr. Howard, if you win, we shall release you. You have no idea where you are. And, even if you can identify what we are at our deepest level, you’ll never see us again. Well, unless you cross us. Will you cross us, shapeshifter?”

“But you don’t believe in God, do you?” he replies. “Don’t try to live in the pretense of belief. You are a creature that relies on deceit. So, with that, you may guess what we are. But be careful. If one guess is wrong—”

“I die.” For some reason I don’t want them to be the one to say it. They’ve been in control up to now. Maybe, just maybe, I could come up with what they want. And just maybe I’ll get out of this alive.

“Well then,” Hector says while leaning back in a relaxed pose, “begin.”

Right off the bat, wasting no time, I turn to Muncy and say, “This guy right here is a werewolf. He smells like a wet dog and, yeah, he’s a werewolf. If this is the game we’re playing, then that’s my guess.”

Muncy glares straight at me, growling, which proves my point. Wanda, who seems to be more than just an amused spectator in all this, nods her head and smiles with admiration. “Well done, kid. You got him by the furry balls, though he’s the easy one. Sticks out like a mutt in kitty litter.”

The last thing I want is for him to get mad. He’s right near me and I can feel his stare. Apart from being right, it suddenly hits me. They’re not kidding around. This man is a werewolf – or he and the others think he is. As I gamble on him not reaching over to tear my throat out, Hector claps his hands once and leans forward in his seat.

“Splendid! But Wanda is right. Muncy’s an easy target,” he says. “What is your take on me?”

There is no way he’s another werewolf and even if he doesn’t have any visible fangs, he’s got white, pale skin. The old horror law of cliché beckons me to classify him as the only monster he could ever be in this cabal.

“You’re definitely a vampire of some kind. There’s no doubt about that.”

“Now, let’s not be so cocky, Mr. Howard!” He suddenly becomes genuinely offended. “I could have been a rich cannibal like Hannibal Lector! In fact, perhaps I am!”

Wanda interjects to keep the integrity of the flash game. “But you aren’t.”

“No, I’m a vampire. Dammit.” Hector takes a deep breath. “I’m like you, Munce. Just another horror stereotype.”

That’s two. Now, all that’s standing in my way of survival is this Wanda person – or monster. What is she? Keeps her composure and finds odd things fun, like putting a man’s life on the line all for a guessing game. She dresses well and is attractive. There’s a narcissistic aura that she wears like perfume. She isn’t afraid to hide it. For a werewolf and vampire to trust her, and even obey her, there must be something she has that they don’t. She could be a vampire like the psycho across the table, but that would be too easy. There’s maybe one thing she could be.

Wanda interrupts my thought, saying with a cheeky eagerness, “And last, but not close to least, there’s me. I’ll give you an unsolicited hint. I’m neither wolf nor vampire. Something very different than them. So? Whatcha got?”

Then, I had to be right. Whether she partakes in the eating of flesh or not, I’ve got the last character type of this sick, twisted clique.

“A witch!” I blurt out confidently, laying my fate in their sinister hands. “You’re a sorceress or a witch – someone who practices dark magic!”

Hanging on her every expression, my heart drops when she says with a chuckle, “Sorry, kid. I happen to be a different monster. I’m the lawyer.”

Frozen in disbelief, all that I can do is laugh. Like a deranged clown, it just comes out of me as something automatic. And I laugh all the way as their cultist minions drag me in my chair to the kitchen. I get a last look at the trio as the double doors close in front of me. Every evil cabal needs a lawyer. And every evil venture needs a human.