How I Create Art -- My Views on Christianity

When I was young I created art with my hands. I don't know that I had developed much of a style that was my own, but I worked primarily with graphite and ink. Over time I lost the use of my hands to severe arthritis. I don't mean that I can no longer use my hands for most daily tasks, only where art and music is concerned. And so I turned to digital art.
For the past almost twenty years now (writing in 2020) I have been using MS Paint and a program called PictureIt! to help others. Usually this was lettering independent comics, layouts, or something to do with magazine printing. And usually this was the work of others.
For about seven years I published Bad Halo Comix with artist Gary T. Becks, who co-created the "JOSEPH!" characters with me. The idea was Saint Joseph raising a 14 year-old Jesus in the modern-day world with his baby sister Ruthie and his best friend Lil' D., the son of the devil. Joseph was always telling Jesus, "no miracles" because, believe me, if your 14 year-old had miracle powers today he would use them. The series begged the question, "What would you do if God asked you to raise His one and only begotten son?" It was the best kind of heresy, but it never found a wide audience. Christians were offended by it and others had no interest in it. After seven years I made the decision to put it on hold, hoping someday to pick it back up. That day hasn't come. Not sure it will.
Working with Gary, and a few other artist friends, gave me the encouragement to return to art. I did so originally as a hobby to pass the time creatively when I wasn't writing. As such, most of my work in my first series is recycled inspiration from other artists, and in all honesty, not very original. When I began to explore new ways of creating I discovered I could return to graphite, at least in appearance. The result was what I called neo abstract graphite. I have since moved on to exploring new styles, but I will always come back to the former graphite style.
I'm often asked about my medium and methods of creating. So I'm going to go over my process here.
I begin, like any artist, with a need to express an idea. I then collect a variety of images to suit my needs in order to convey that idea, and I assemble them in a composite using the old collage method. Next I build a model. Here is an example: 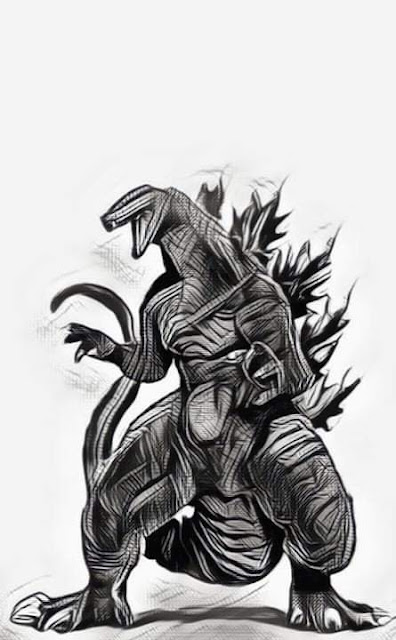 For this piece I took different pieces of Godzilla from different Godzillas and made a model I liked. The lines are dark and heavy because I use them as place markers.
The next step is building over top of that model. Like this: 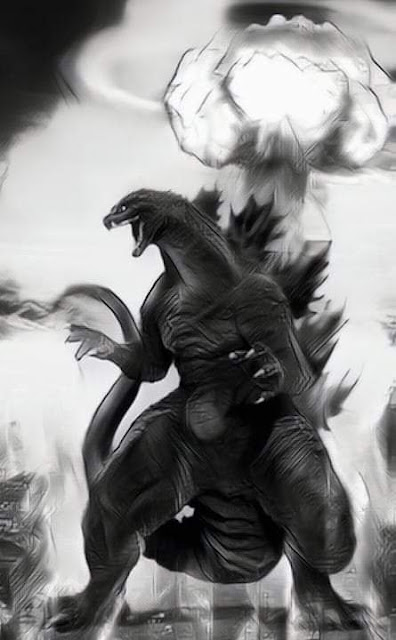 Here you can see I was starting to flesh out the idea. I added an explosion in the background and a city at Big-G's feet, although you can't see it very well because I wanted it to look like he was radiated nuclear heat.
From here I had to decide on the style. I wanted to go with my neo abstract graphite, and started to do so, but didn't like how it was going. Sometimes that happens and I will switch to suit the need of the piece. I went with an old watercolor style because it gave me a Japanese impression. Seemed appropriate and felt right. This was the result: 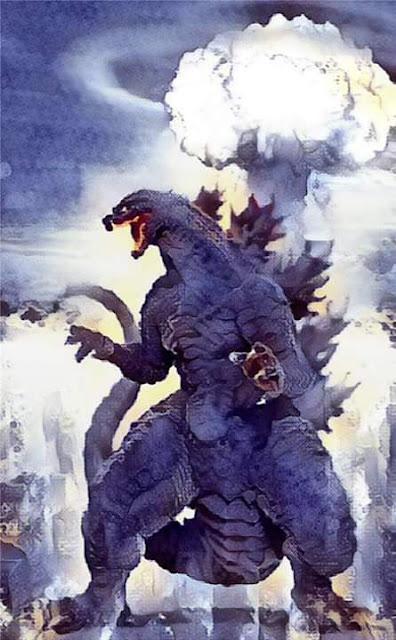 And that's how I work. The PictureIt! software I use is no longer supported or being made. Neither is Paint. I could make things much easier on myself if I would just stop being an old guy and learn how to use other, and better, programs and software. But to that I say, humbug! I don't wanna.
I don't use PS and I don't want to learn how. I don't have a smart phone so I don't use filters. I create what I want my way, and I let others create what they want their way.
I DO NOT take commissions. I'm not looking for a job or a career. I do what I do because it's what I choose to do, not what anyone else wants to pay me to do. The moment I take someone's money they're the boss. I don't need a boss. I live with a woman.
However...!
If you have a need and I can help let me know. If your project is something that I find interesting and can feel passionate about I may be all in.
HOW I FEEL ABOUT CHRISTIANITY
I am a Christian, yes. I'm not going to defend that or apologize for it. It is who I am. But I do understand that some can look at my art and/or read my work and wonder how someone who claims to be a Christian can create such dark, terrible things.
I spent a long time walking in darkness. Now I walk with God. I create in art and literature what I see in the world. It sickens me that some use forgiveness as an excuse for evil. They preach the love of Christ but teach hatred with their actions. They allow men of God to sexually abuse children and do nothing about it. They see injustices in their neighborhoods and do nothing about it. They take "offerings" from the poor who have nothing and do nothing to meet their basic needs. They profit off of the gullible and desperate and grow wealthy. They judge their brothers and sisters for loving another of the same sex, claiming it is the law of God, and devalue that law as not applicable when it applies to them. They make war, they murder, they rape, and they celebrate egomaniacal tyrants who would sell them for a vote, only because they have been groomed by flattery.
Yet my work is offensive?
The only answer I can give is, my work is dark because it is what I see. When Christians start acting like Christ that may change.