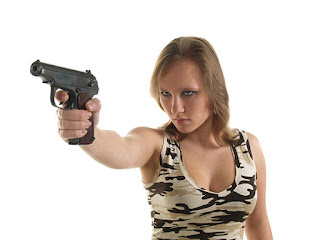 Crystal pulled up to the curb out front of Carl’s house in a different car than her own. She put the car in park and shut it off.  She stepped out in a hurry, went to the back and opened the trunk. Inside was a small handgun case. Crystal opened the case. Inside was a Makarov PM with a clip of 9x18mm ammo that had not been temporarily confiscated by the police. They had no legal right to do so but worrying about the law was not going to help now. She pulled it out, slid the magazine in, and then threw the case back into the trunk and tried to close it. Her prosthetic arm caught on a latch and she pulled hard, almost ripping it off. She centered herself to take control, then she released the latch and her arm came loose.
Of the norm she would not be this careless, but their hurdles with the police had rattled Deloris and she wasn’t in the right frame of mind for waiting. In the field you rely on intel. Going in blind is a surefire way of ending up dead. She had no idea if Deloris was dead, much less the kid she was going after. Probably both were dead. But she knew if Deloris had any chance of surviving this recklessness she had no time for intel and planning. As for the law, she would have to deal with that later, because this time she was about to break a few.
Cybil was sitting on the floor next to the window, holding that instrument of protection and death close and crying. She shook her head at the implications, wondering what her mother must think of her, then looked up. She prayed to a God she didn’t know existed or not. That was always a point of contention with her mother.  In doing so she looked out the window and saw movement. She knew Deloris was already here, trapped somewhere inside her father’s dungeon. He was going to kill her.
_________________________
Crystal was approaching. Her Makarov was not exposed. Cybil watched her silhouette disappear at the side of the house. She bowed her head, breathed in heavy to gather courage, then jumped up and rushed to the garage. She flipped both the light switch and the switch that opened the garage door. She held the gun at her side and when the slow opening door was wide enough she ran out into the driveway. She looked around, not moving far from the garage.
“Hey,” she called out, just above a whisper and uncertain. “Hello? Hello?”
She waited for a voice to respond, then called out again. “Are you here for Deloris? She’s my friend. I need your help. Please! She needs your help.”
Crystal walked out of the darkness and into the light of the garage.
____________________________
Previous Chapters
Chapter One
Chapter Two
Chapter Three
Chapter Four
Chapter Five
Chapter Six
Chapter Seven
Chapter Eight
Chapter Nine
Chapter Ten