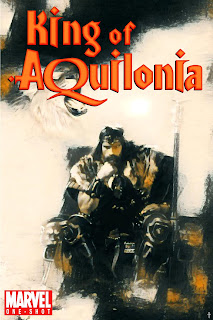 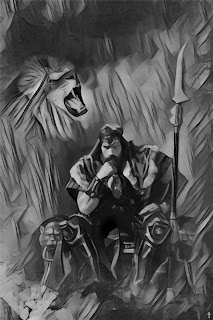 Click
This is not horror art, no. More like fan-art of an original concept. I'm a big fan of REH, Conan the Barbarian, and the John Milius film. If Mandatory Midnight was ever going to cover a book that isn't directly horror, Hour of the Dragon would be it. However, I'd have to reconsider because not only is Conan not horror, Howard was a racist. And I just preached at you about Lovecraft being a racist.
Anyway, the idea here is that Marvel should publish an adaptation of Hour of the Dragon (AKA Conan the Conqueror). I think they may have done that in the past but this would be a direct sequel to the original Milius film. The four diamonds in the title logo is a reference to the four kingdoms Conan conquered under his rule. The lion is, of course, Amra. We would see Conan conquer, rule, and eventually abandon the crown.
In the opening scene we would see a party of raiders gathered around a camp fire at night. They've just departed from pillaging a local village where they plundered, stole, raped, and killed. A large figure looms from out of the shadows. But he doesn't look dangerous. He's an old man with a scarred face and a long beard. He joins the party around the camp fire and to pay for their generosity, he tells them the story of how Conan of Cimmeria came to wear the jeweled crown of Aquilonia upon a troubled brow.
Later, after Conan has left Aquilonia to be ruled by the strongest (which may or may not be his own son Conn), he wanders into the darkness -- the old man tells them, "never to be seen again." He looks over a sword one of the raiders took from the village. It's of fine quality and craftsmanship and reminds him very much of the sword of his father.
The raiders thank him for the story of a great usurper they have only ever heard stories of. They know the old man must have known Conan of Cimmeria, to be able to tell this story with such conviction. They ask him for his name, so that he may be remembered when he dies.
The old man stands, still holding the stolen sword in his hand. He raises it and points it at the raider who murdered for it. He says, "I'm going to kill you now...all of you...with this sword... And you are going to die with my name on your lips."
CREDITS