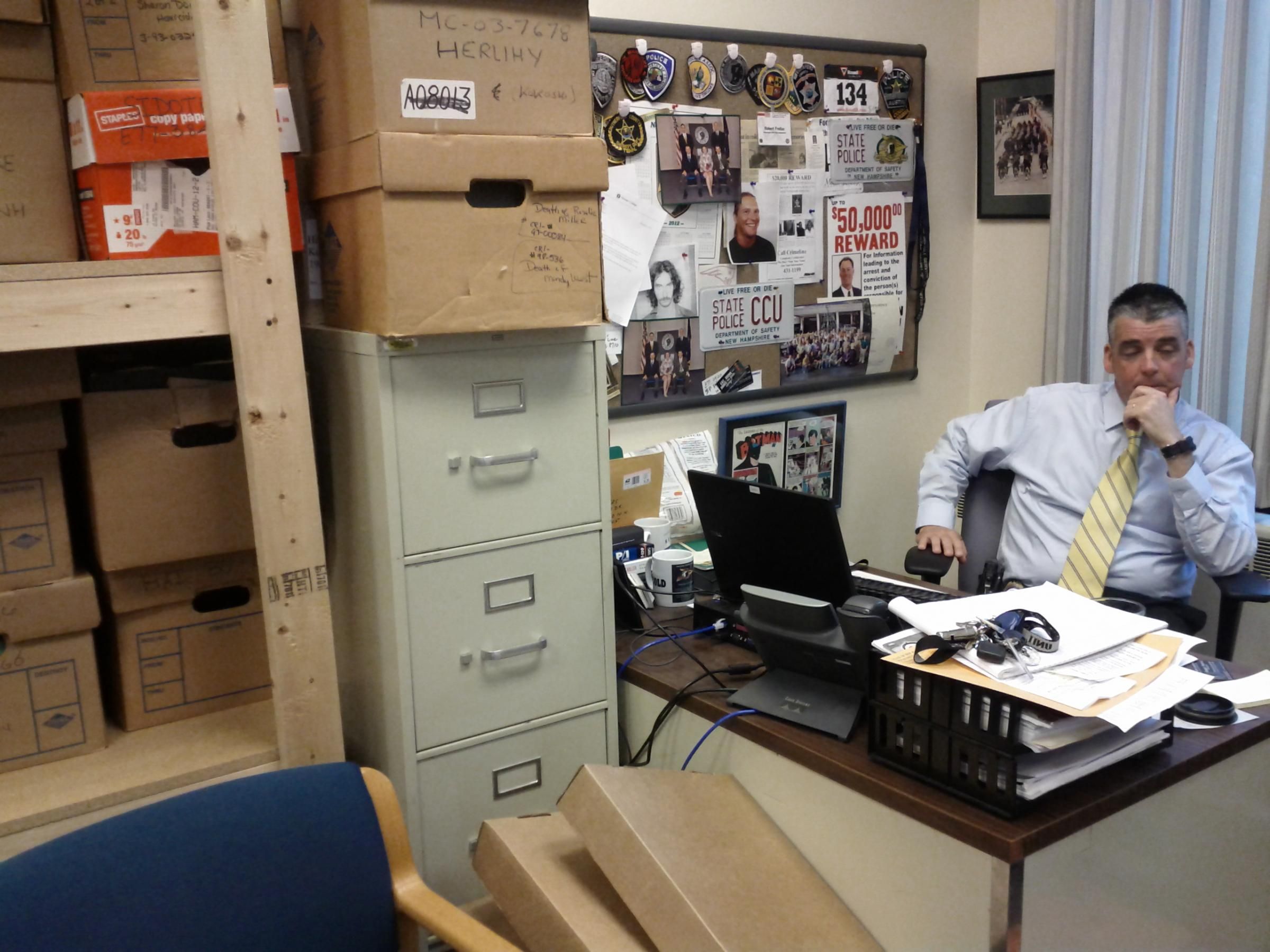 A psychotic father kidnaps teenage girls and uses them as sex dolls in place of the daughter he raped, while her guardian will stop at nothing to find her. When sixteen-year-old Cybil believes her mother was killed by the father who raped her she runs away from Deloris, a woman who loves her like her own daughter and who operates the House of Rahab, a halfway home for young women with backgrounds in prostitution. On the streets Cybil finds the friendship she needs, only to lose it when her father finds her. Now Deloris must overcome an ingenious captor and bring Cybil home.


Behind a small desk in the Missing Persons of the Metro Police Department sat Detective Eastman. He stared at an old monitor with numerous windows opened and a case file for Cybil. His twenty-six years of watching humans dehumanize one another etched hard lines into his face. Across from him was Deloris, a former prostitute, reformed, trying to better the lives of women where she used to be. She looked nothing at all like an upstanding community leader, tattooed and pierced, her hair purple with pink highlights. She stared back at him with an agitated expression.

“You’re telling me to piss off?”

She explained, “In three days I’ve seen three different versions of you, Detective Eastman. Some of your names were Daniels and DePaul and Waters. Either you people get off on giving good people bad news, or you’re jerking me around.”

She dropped a file of her own on the desk in front of Eastman. The cover  was attached with a small portrait of Cybil.

Eastman said, “You know how this works, Deloris.”

She demanded, “Open it!”

Eastman was compelled. He took the file and opened it. There was a lot more content on paper in this file than there was on his screen, including numerous pictures of Cybil with her mother and Deloris. It was personal to her.

“I get it,” he said. “I do. But we can’t just canvas the streets twenty-four hours a day, looking for  a teenager we don’t even know is in the city.”

She needed him to know the girl’s name, not just a case number. She said, “Her name is Cybil and she’s sixteen. Sixteen! That makes it your job to find her and bring her back to me.”

“You’re not even her guardian,” he said.

Deloris came up out of her seat. “Her mother’s dead, dumbass! What? Your highly detailed civic file not provide you with that tiny little detail?”

He apologized, before this tiny little Christian woman slit his throat. “I’m sorry. I’m new to the case. I didn’t—”

Deloris grabbed one of the pictures from the file and held it up to Eastman’s face. She said, “This is Cybil’s mother. Jolene. She died four days ago and her daughter, her very scared little girl, ran away because she thinks her daddy killed her mommy.”

Eastman sat back in his chair and waited for Deloris to do the same. There were tears in her eyes. She turned and picked up her belongings to leave.

“But I guess you’ve got bigger concerns.”

Eastman got up to hurry after her. He said, “It’s not much, but I know someone with CPS.”

Deloris was unconvinced. ”I’ve already been to Child Protective Services. They’ve never been any help.”

“I know. Their hands are just as tied as ours for something like this. But the guy I know sometimes works off the books.”

Eastman went back to his desk and picked up his phone. He scrolled through it for a contact.

She asked, “You mean in the shadows? Like you guys look the other way?”

He found the contact number and wrote it down.

“That’s what you got? Police can’t do anything so you’re, what? Doing me a personal favor?”

He handed her the number. “Right now this is just a missing persons. If it was something else, something worse… I’m sorry. It just sucks. You say she’s scared of her father?”

“Yeah. Convicted pedophile. Raped her when she was twelve.”

Deloris looked at the name and the number, memorizing it. She balked at the fake name. “Bob?”

“Real name,” Eastman said. “Promise. And if she’s still in the city there should be a trail. But I can’t imagine she’s gotten very far.”

“I’m going to do everything I can.”

“No, I mean saying all that just to offer some kind of empty solace.”

Eastman didn’t know how to respond to that. She was jaded, but she was smart. He leaned toward honesty, and said, “I know you’re worried. You care about this girl. I’m supposed to tell you everything you’ve already heard from the three other faces who sat here. And I want it to be true. I want to find Cybil. I want  to call you and tell you she’s alright. But I’m pretty sure you know the odds aren’t good. You don’t want me to bullshit you? I won’t.”

Deloris appreciated his candor. She sighed and swallowed her grief. She turned again to leave, and said, “Thank you.”

Deloris walked out, in a hurry to call “Bob” and the next day she sat in his office with Cybil’s file draped over her lap and her purse at her feet.

Bob walked into his office, carrying a file, searching through it. He looked up to greet her only briefly, extending his hand. “Hi. Deloris. Right?”

Deloris shook his hand and he took a seat behind the desk, still looking through the file. He said, “I understand we’re on the clock here.”

Deloris was about to reply when Bob looked up to notice that he forgot to close the door behind him.

She got up, closed the door, then sat back down.

She was annoyed, but tried to remain polite. “This is an emergency, if that’s what you mean.”

Deloris placed her file of Cybil on the desk and Bob let the file he brought in with him fall open. She said, “I brought you everything I’ve collected on Cybil and her mother…”

She saw the contents of the file Bob brought in was all about her, including her criminal record. “Ya know, if there’s something you wanna know about me all you gotta do is ask.”

Bob took Cybil’s file, opened it and leaned back. “Yeah. Yeah, Craig  said you had a way with being straightforward. Said you had a low tolerance for bullshit.”

“I have a low tolerance for pretension. You’re not pretentious. Are  you, Bob?”

Bob sat the file down. “I was when I was younger. I started this job straight out of college, full of ambition and excitement. Thought I’d be working to better the lives of families. Some twenty years later, all I’ve seen is corruption in government and families torn apart.”

He said, “I had Craig—uh, Detective Eastman, send me your file so I could familiarize myself with your past before we met. I printed it out because when we take on one of these cases I don’t keep e-files.”

He picked up Cybil’s file and added it to his own. “People tend to give me their own materials.”

Deloris was encouraged that Bob might be offering real help, but she did not just let his use of the word “we” pass her  by.

“Something about my past interest you?”

Bob closed the files and put them aside. “Yeah. You were first charged with soliciting when you were a minor.”

“Numerous charges,” he said. “Some worse than others, on up to the age of twenty-six?”

“And then what? Nothing criminal after that. But a few years later you show up on radar as a charity founder.”

“No. Well, yes and no, I guess.” He waited. She explained. “The church I attended had more real-estate than they knew what to do with. I expressed an interest in a ministry for getting young women out of prostitution and off the streets. And that’s the story of the House of Rahab.”

Bob nodded. He had heard these kinds of stories before. Usually there was something corrupt going on behind the scenes.

Deloris was tired of the questioning. They were wasting time. “You wanna help me find Cybil or listen to my testimony, Bob? ‘Cause I ain’t got time to do both.”

“I need to know who I’m going to be helping.”

Deloris was unable to hold herself down. “Shit! I was a whore, Bob. What more you need? I did a lot of drugs and sucked a lot of dicks.”

Bob was taken aback, but he listened.

“More? Alright. After about the sixth overdose they thought for sure I was dead this time, but no. God wasn’t done with  me. So, yeah. I got ‘saved’ and decided, gee, I’d  sure like to help girls not have to go through the same hell I went through of suckin’ dick everyday just to deaden my body and kill myself inside.”

Deloris leaned over the desk, furious, staring down Bob. “Now, do I have to suck your dick or are you gonna help me find that little girl?”

Bob pushed himself away from the desk, away from Deloris. He said, “Deloris, please. Let’s just calm down and—”

“Don’t tell me—don’t ever fuckin’ tell me what to do.”

“Wouldn’t think of it. But I needed to press you.”

Deloris withdrew, collected herself. “Sorry. I just don’t like being told  what to do. And I sure as hell don’t like jumpin’ through hoops.”

“You got fire. You’re going to need it.”

Bob picked up the file and wrote something on its cover. “Pardon?”

Bob pushed the file over to Deloris. On the cover she  read: CRYSTAL, followed by a phone number.

“’We’ are myself and my sister Crystal. I do all the paperwork that needs to be kept legitimate and she does all the legwork.”

“Then you are helping me?”