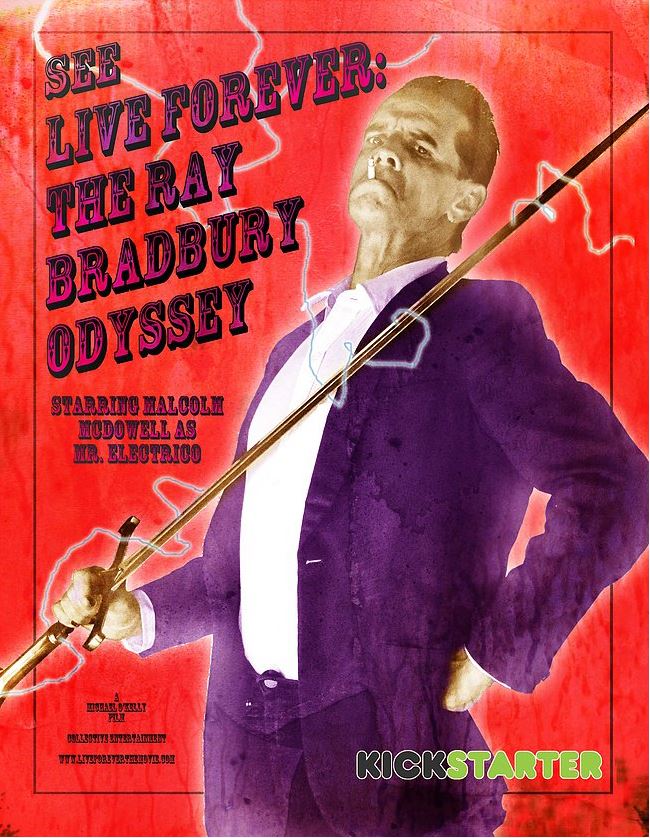 This is a special treat for me. I’ve known Christopher Cooksey since before his endeavor as an independent filmmaker; all the way back to comics and his publication Moonlight Art Magazine when I did the lettering for a short titled “The Temp”. Some years after that I designed the logo for his upcoming Lovecraftian horror film “The Quantum Terror”.


When he helped to create the biopic LIVE FOREVER: THE RAY BRADBURY ODYSSEY I followed with a passion, hoping for any morsel of information he could share. To his credit it wasn’t much. Production for such a project was hush-hush, as you can imagine.


During that project (probably between the years 2011-2012) Chris got to know the author while he was still with us. Unfortunately Bradbury died before the film’s release. Although in some ways it serves as a part of *Mr. Electrico’s prophecy that he would “live forever”.

Ray Bradbury's published stories of time travel, Mephostofilies carnivals, trips to Mars, and societies where people who don't stay at home watching hours of vacuous television are considered dangerous to society, helped to shape me into the man I am today. Granted, that man is generally grumpy and suspicious of everything but he still has an incredible love and passion for the human spirit, just as Bradbury did. He also imparted onto me the beautiful yet powerful importance of metaphor. Just try pointing out the phantasy in any individual's assumption on any given subject these days and you're sure to watch their brain melt in the heat of their rage, all in real-time. However, if you tell them a story using a metaphor they relax, start to access the context, relate to new perspectives, and are generally more likely to come around to new ideas, not necessarily your ideas but new ones, on their own. That's the beauty of art. It's an examination and exploration for ourselves, both author and audience. If you want to just beat people over the head with what you presume are facts, you might as well just go into the propaganda business.


When asked about his origins Ray would often tell the tale of his childhood excursion to the carnival to see the amazing magician Mr. Electrico, who's main act would be to be strapped into an electric chair. The switch would be thrown, the sparks would fly, and Electrico would convulse as the volts ran through him. But would he die? No. Instead, he rose out of the chair and was handed a sword by his assistant. Stepping down, he would walk to the edge of the stage and knight each child in the front row. "LIVE FOREVER!" he would yell, as the static electricity would leap from the sword and cause the children's hair to stand on end.


"Dear God," Bradbury would recount. "How do I do that?" Thus was born his quest for immortality, not as a man who would never die, but among the bookshelves of his beloved bookstores and libraries with the other immortals; Poe, Wells, and Lovecraft, just to name a few.


I love that story. Many people have questioned if it really happened. They'll point out that there's no record of any performer going by that name on record, or that with each retelling a detail here or there would change. They're missing the point. Years later I was approached to do the visual effects on a play and then a documentary about Ray's life, but it wasn't really about his life. It was about his imaginings, which were the driving force in his life. By then I had been to see the man speak many times, gotten autographs, and even given him some artwork. So the excitement to bring some of what was in his head to life was palpable.


I brought together a team of lifelong fans to be part of the project because getting it right would take a full understanding of his writings. One of my best friends Dave Grave (frontman of the band Frankenstein) filled the role of Mr. Electirco, which would later be taken over by none other than Malcolm McDowell. To be quite honest, I felt Dave made a better version of the stage performer but McDowell was a longtime friend of Ray's and an undeniable powerhouse of cinema, so what are ya gonna do? We were working on a shoestring budget but turned out some pretty impressive work for the time. We did other works, mainly poems by Ray, some nods to the Martians and of course Dark Ferris, which is what evolved into Something Wicked This Way Comes, but it was that story of his childhood encounter that I just couldn't get out of my head.


You see, real or not, the story of Mr. Electrico is indeed a metaphor for the driving forces behind Ray Bradbury because at its heart it's the story of Christ's resurrection and the promise of the Kingdom of Heaven. Just swap out the crucifix for the electric chair and it becomes the same message. One man is nailed up, one strapped in. They both "die" and return, absolving us of sin through light, or lightning, and deliver the promise of eternal life through God. A father imparting purpose and responsibility to the son. With Ray, all of that is embodied through his art. Whether you are a true believer or just think it's all a metaphor, the intent is the same. It brings you around to understanding all of these things. That's the genius of Ray Bradbury. That's his promise when you open up one of his books.

My thanks to Chris.

*Elsewhere in this series I may have written “Mr. Electro”. That is incorrect. The name has always been “Mr. Electrico”.