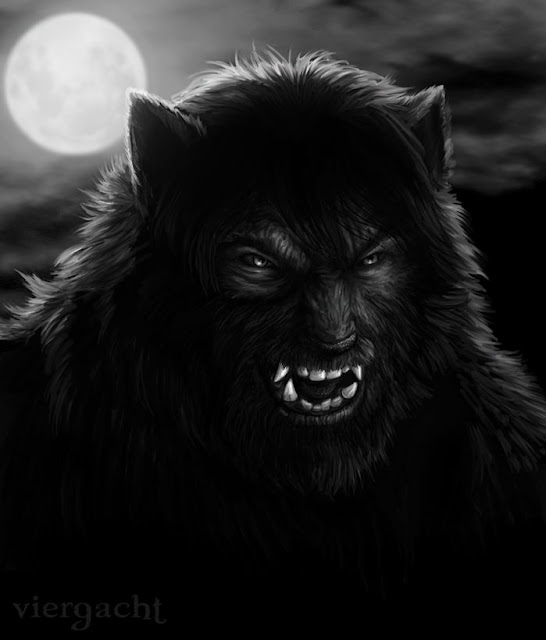 ACT III.
Orlok  and Jäger  have found a  lair in a cave  within the mountains  surrounding the valley  in which Wisborg is nestled.


Annie  awakens  to a new  eternal life  of torment as  Orlok’s consort. Horrified,  she attempts to escape but  discovers that when the sun rises  she becomes as one dead, and therefore must,  just like the Count, depend on the werewolf as  her guardian.


Orlok  orders the  werewolf to dig  her a grave in which  to sleep, who does so  reluctantly and resentful.  By night the vampire has found  a flock of sheep to sustain himself,  Annie, and his werewolf, after killing  the shepherd and his family. But by day  Orlok is unable to rest within the earth of his homeland, and it  is driving him mad.


In  Wisborg,  weeks have  passed and Harding  is recovering, although  both he and the Kammissar  fear his inevitable transformation. The  Kammissar has sent out a search party after  Annie but they have found nothing. Harding hopes  he can find her himself as his transformation approaches.


Annie  is growing  hungry but refusing  to feed, while Orlok attacks  nearby villagers lured out by  Jäger. Annie thinks she can appeal  to something within Orlok that may be  human. She tells him a story about a sister she had when she was little who  drowned and how much she misses her every day. Orlok tells her a story  of the brother he had when he was young, how he murdered him. When she asks  him why he killed his own brother he tells her, “A kingdom must be led by a single  ruler… There is no hope for you in your hour of desperation. I am the only authority  by which you will be led… Hope is a luxury for the living.”


Armed,  the Kammissar  and Harding travel  far from Wisborg in search  of Annie and find both the  shepherd’s farmhouse and the nearby  village. When they figure the vampire  is feeding on the remaining sheep and what  humans he can manage, they decide on a plan  of action. They will destroy the remaining sheep  and force the vampire into the village, where they  will set a trap. But the night sets upon them and they  are suddenly attacked by two young vampires – the children  of the shepherd! Not without appropriate weapons, Harding and  the Kammissar fight and kill their attackers. Harding knows that  his strength has increased because of the moon, and tomorrow night he will transform.


That  morning  a jealous  Jäger returns  to the cave, and  just in time. Orlok’s  madness is forcing him  out of the safety of the shadows  and into the burning light of the  morning. While he was away, Annie (now  strong enough to “live” during the light of  day, but safe in the shadows of the cave) had  tried to seize the opportunity to convince the vampire  into the sun, but the werewolf returned and prevented his  master’s destruction.


Later,  Annie realizes  her own strength  is growing preternatural  in scale. With Orlok fighting  madness she attacks Jäger. As they  fight the sun sets, the moon rises, and  Orlok returns to normal as Jäger transforms  into his werewolf form. Before the creature can  tear into Annie with its full strength Orlok splits  them up and promises Annie that tonight she will feed.


Earlier  the Kammissar  and Harding found  lodging in the village.  On legal authority the Kammissar  ordered the villagers to huddle together  at the church and secured Harding in chains.  When the moon was high Harding finally changed. The  Kammissar ordered men to stand guard while he and a  few volunteers waited for the appearance of the vampire  and his werewolf.


Unable  to control  herself any longer,  Annie hopes she can use the  hunger and the power to kill  Orlok, and leaves the cave to do so.


Meanwhile,  the Jäger werewolf  has found the new Harding werewolf.  Attacking, he kills the guards. As the  two fight Harding is broken free from his  chains. The two terrorize the villagers, who flee  into the mountains. Annie finds the Kammissar fighting  for his life against Orlok. When she intervenes both Jäger  and Harding enter the scene. The Kammissar is outmatched and  falls back to let the supernatural creatures fight it out. He  lures them into the shepherd’s farmhouse, where he pulls Annie out,  bars the doors and sets a fire. Mercifully, he uses silver bullets to  try and put the werewolves down. But Annie, fully under Orlok’s control, kills  the Kammissar. She opens the doors, stands back, and watches as Orlok and the werewolves  under his control walk out.


The  farmhouse  burns down.  Orlok motions  and the werewolves run  into the night, hunting  the fleeing villagers. On  the horizon, in the distance,  the first signs of a pale rising sun  glows. Annie looks at it longingly, a tear  streaming down her face. But she turns to follow Orlok back into the safety of the  cave.


Pulling out,  we hear the screams of murder, and the howl of  werewolves.

Thanks for reading my three-act treatment for the sequel to the 1922 classic NOSFERATU: A SYMPHONY OF HORROR starring Max Schreck. If you’re unfamiliar with that film’s story I have included it here below.


In 1838, Thomas Hutter lives in the fictional German town of Wisborg.[3] His employer, estate agent Herr Knock, sends Hutter to Transylvania to visit a new client named Count Orlok who plans to buy a house in Wisborg. Hutter entrusts his wife Ellen to his good friend Harding and Harding's sister Annie before embarking on his journey. Nearing his destination in the Carpathian Mountains, Hutter stops at an inn for dinner. The locals become frightened by the mere mention of Orlok's name and discourage him from traveling to his castle at night, warning of a werewolf on the prowl.


The next morning, Hutter takes a coach to a high mountain pass, but the coachman declines to take him any further than the bridge as nightfall is approaching. Another coach appears after Hutter crosses the bridge and its coachman gestures for him to climb aboard. Hutter is welcomed at a castle by Count Orlok. When Hutter is eating dinner and accidentally cuts his thumb, Orlok tries to suck the blood out, but his repulsed guest pulls his hand away.


An iconic scene of the shadow of Count Orlok climbing up a staircase
Hutter wakes up to a deserted castle the morning after and notices fresh punctures on his neck which, in a letter he sends by courier on horseback to be delivered to his wife, he attributes to mosquitoes. That night, Orlok signs the documents to purchase the house across from Hutter's own home in Wisborg and notices a photo of Hutter's wife, remarking that she has a "lovely neck."


Reading a book about vampires that he took from the local inn, Hutter starts to suspect that Orlok is a vampire. He cowers in his room as midnight approaches, with no way to bar the door. The door opens by itself and Orlok enters, and Hutter hides under the bed covers and falls unconscious. Meanwhile, his wife awakens from her sleep, and in a trance walks towards her balcony and onto the railing. Alarmed, Harding shouts Ellen's name and she faints while he asks for a doctor. After the doctor arrives, she shouts Hutter's name, apparently able to see Orlok in his castle threatening her unconscious husband.


The next day, Hutter explores the castle. In its crypt, he finds the coffin in which Orlok is resting dormant. Hutter becomes horrified and dashes back to his room. Hours later from the window, he sees Orlok piling up coffins on a coach and climbing into the last one before the coach departs. Hutter escapes the castle through the window, but is knocked unconscious by the fall and awakens in a hospital.


After recovering, Hutter hurries home. Meanwhile, the coffins are shipped down river on a raft. They are transferred to a schooner, but not before one is opened by the crew, revealing a multitude of rats. Sailors on the ship fall ill, and soon all but the captain and first mate are dead. The first mate goes below to destroy the coffins, but Orlok awakens and the horrified sailor jumps into the sea. When the ship arrives in Wisborg, Orlok leaves unobserved, carrying one of his coffins, and moves into the house he purchased. The next morning, when the ship is inspected, the captain is found dead. The doctors conclude that the plague is to blame. The town is stricken with panic, and people are warned to stay indoors.


There are many deaths in the town, which are blamed on the plague. Ellen reads the book Hutter found, which claims that a vampire can be defeated if a pure-hearted woman distracts the vampire with her beauty. She opens her window to invite Orlok in, but faints. Hutter revives her, and she sends him to fetch Professor Bulwer, a physician. After he leaves, Orlok enters and drinks her blood as the sun begins to rise. Knock, who has been committed after having murdered the warden of a psychiatric ward, senses the threat to Orlok, but cannot escape his cell to warn him. A rooster crows, and the sunlight causes Orlok to vanish in a puff of smoke. Ellen lives just long enough to be embraced by her grief-stricken husband. Count Orlok's ruined castle in the Carpathian Mountains is then shown.