By the pricking of my thumbs SOMETHING WICKED THIS WAY COMES -- The Ray Bradbury Saga pt. 3 -- The Movie 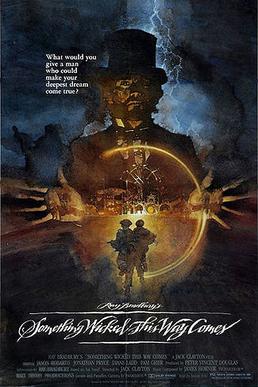 And now we come to the finale. Writing for this series has been pure joy for me. This is at the top of my list of favorite horror books of all-time, and I’ve been fortunate to know a few people with connections to one of the most beloved authors in American history.


The film was shot in Vermont and at the Walt Disney Studios in Burbank, California. It had a troubled production. Jack Clayton, the director, fell out with Bradbury over an uncredited script rewrite, and after test screenings of the director's cut failed to meet the studio's expectations, Disney sidelined Clayton, fired the original editor, and scrapped the original score, spending some $5 million and many months re-shooting, re-editing and re-scoring the film before its eventual release. And you can tell! In the scene in which the Dust Witch infiltrates the boys’ homes and torments them with large spiders, it is obvious the actors grew from boys to awkward teenagers.


Ray Bradbury wrote the screenplay in 1958, intended as a directorial vehicle for Gene Kelly. Financing for the project never came, and Bradbury converted the screenplay into a novel, published in 1962. For my money, this was for the better. Books are always better, yes. But Bradbury had been vocal many years over his complaints about “writing in Hollywood”. He just wasn’t happy with the process. There could be any number of reasons for this. We’ll never know. But I don’t think it’s unreasonable to speculate that the author was a one-man creative team. That’s not to say he wasn’t a good screenwriter. Let’s not forget all the screenplays he wrote for Ray Bradbury Theater. The problem here was the relationship with the studio and the director and the producers, who all had their hands on Bradbury’s script, thereby hindering the writer.


In 1977, Bradbury sold the film rights to Something Wicked This Way Comes to Paramount Pictures. He and director Jack Clayton, who Bradbury had previously worked with on Moby Dick, produced a completed script. The movie was intended to be produced by Kirk Douglas' Bryna Productions, and Douglas was to have starred in it. However, production never began and the film was eventually put into turnaround. At various times Sam Peckinpah and Steven Spielberg expressed interest in making the film. Oh, what could have been!


At this time Walt Disney Pictures was concentrating on films with more mature themes in an attempt to break free from their stereotype as an animation and family film studio. Remember The Black Cauldron?


The studio sought Bradbury's input on selecting a cast and director and he suggested Clayton, feeling they had worked well together at Paramount. In a 1981 issue of Cinefantastique Bradbury stated that his top choices to play Mr. Dark were Peter O'Toole and Christopher Lee (who would have been perfect!). However, Disney decided to go with a relatively unknown actor instead in order to keep the budget down, and Jonathan Pryce (who was great) was eventually cast. As the film progressed, two differing visions emerged for the film, with Bradbury and Clayton wishing to stay as faithful to the novel as possible, while Disney wanted to make a more accessible and family-friendly film. Bradbury and Clayton fell out during production after Bradbury discovered that Clayton had hired writer John Mortimer to do an uncredited revision of Bradbury's screenplay at the studio's insistence. And there’s a legitimate complaint, right there. Bradbury had every right to feel undermined because he was. The work was/is Ray Bradbury’s Something This Wicked This Way Comes, not Walt Disney’s Something Wicked This Way Comes. It was an unethical move to say the least.


At a Q&A session following a 2012 screening of the film, actor Shawn Carson explained that he originally read some ten times for the part of Will, but after a request from Bradbury he read for, and was cast, in the part of Jim Nightshade instead. Although he had blond hair at the time and co-star Vidal Petersen had dark hair, Carson's hair was dyed jet black and Petersen's was dyed blond to fit the new casting.


For the original score Clayton picked Georges Delerue who had scored his films The Pumpkin Eater and Our Mother's House, but his score (considered "too dark" by Disney) was later removed and replaced at short notice with a score by James Horner. A soundtrack album of Delerue's unused score was released by Intrada Records in 2015. Horner's replacement score was previously released by the same label in 1998.


Editor Barry Gordon was hired as assistant to the film's original editor, Argyle Nelson Jr. He recalled in 2012 that after Clayton submitted his original cut, Disney expressed concerns about the film's length, pacing and commercial appeal. The studio then took the project out of Clayton's hands and undertook an expensive six-month reshoot and re-edit. Nelson was let go for budgetary reasons, and although Gordon was originally prepared to follow Nelson and leave the production, Nelson encouraged him to stay and Gordon edited the final cut, which resulted in the film's dual editor credits.


Disney spent an additional $5 million on re-filming, re-editing, and re-scoring the film and Gordon was required to make a number of changes to Clayton and Nelson's original cut, removing several major special-effects scenes and incorporating the new material (directed by Leo Dyer), including a new spoken prologue narrated by Arthur Hill. Among the casualties was a groundbreaking animation scene, which would have been one of the first major uses of computer-generated imaging in a Hollywood film; combining the then new technology of CGI with traditional animation, it depicted Dark's circus train rolling into town, and the carnival magically materialising – the smoke from the locomotive becomes the ropes and tents, tree limbs grow together to form a ferris wheel, and a spider web morphs into a wheel of fortune. The deleted scene was previewed in detail in the May–June 1983 issue of Twilight Zone Magazine, but in the event the re-edit retained only a few seconds of the sequence. Another cut sequence depicted Mr. Dark using his sinister powers to send a huge disembodied hand to reach into the house to grab the boys – this mechanical effect was deemed not realistic enough by Disney executives, and was replaced by a new scene in which the room is invaded by hundreds of spiders. This was shot using real spiders (mentioned above), and years later Shawn Carson recalled the considerable discomfort he and Vidal Petersen experienced as a result of being exposed to the irritating urticating hairs of the 200 tarantulas used in the sequence. Some reading this are thinking, Why didn’t they burn down the house?


Bradbury referred to the film's final cut as "not a great film, no, but a decently nice one."


The film grossed $8.4 million at the domestic box office against its $19 million budget. Not a box office smash.


Roger Ebert of the Chicago Sun Times gave the film three-and-a-half stars and said: "It's one of the few literary adaptations I've seen in which the film not only captures the mood and tone of the novel, but also the novel's style. Bradbury's prose is a strange hybrid of craftsmanship and lyricism. He builds his stories and novels in a straightforward way, with strong plotting, but his sentences owe more to Thomas Wolfe than to the pulp tradition, and the lyricism isn't missed in this movie. In its descriptions of autumn days, in its heartfelt conversations between a father and a son, in the unabashed romanticism of its evil carnival and even in the perfect rhythm of its title, this is a horror movie with elegance."


Janet Maslin of The New York Times said the film "begins on such an overworked Norman Rockwell note that there seems little chance that anything exciting or unexpected will happen. So it's a happy surprise when the film ... turns into a lively, entertaining tale combining boyishness and grown-up horror in equal measure;" according to Maslin, "The gee-whiz quality to this adventure is far more excessive in Mr. Bradbury's novel than it is here, as directed by Jack Clayton. Mr. Clayton, who directed a widely admired version of The Turn of the Screw some years ago, gives the film a tension that transcends even its purplest prose." Conversely, Variety wrote that the film "must be chalked up as something of a disappointment. Possibilities for a dark, child's view fantasy set in rural America of yore are visible throughout, but various elements have not entirely congealed into a unified achievement ... Clayton has done a fine job visualizing the screenplay by Bradbury himself, but has missed really connecting with the heart of the material and bringing it satisfyingly alive." Gene Siskel of the Chicago Tribune gave the film 2 stars out of 4 and wrote that it "opens promisingly" but has a script which "tries to cram too much material into one story" and a climax that "couldn't be more disappointing," with "neon special effects that overwhelm the last half hour of the movie. The result is an oddball combination of a 'Twilight Zone' episode with the climactic, zapping-the-Nazis scene from 'Raiders of the Lost Ark.'" Kevin Thomas of the Los Angeles Times praised the film as "one of Walt Disney's best efforts in recent years—a film that actually has something to offer adults and adolescents alike." Richard Harrington of The Washington Post criticized the "lethargic" pace, "stolid acting," and special effects that "are shockingly poor for 1983 (a time-machine carousel is the only effective sequence on that front)." Tom Milne of The Monthly Film Bulletin lamented that "the novel's texture has been thinned out so ruthlessly that little is left but the bare bones; and all they add up to, shorn of the slightly self-conscious Faulknerian poetics of Bradbury's style, is a dismayingly schoolmarmish moral tale about fathers and sons, the vanity of illusions, and homespun recipes for dealing with demons ('Happiness makes them run')."


As of September 2019 the film holds a 60% rating on Rotten Tomatoes based on 30 reviews. Of course, had the movie met with Bradbury’s true vision, or if someone could adapt the film correctly today, that may be quite different. In 2014 Disney announced a remake of Something Wicked This Way Comes with Seth Grahame-Smith writing the script, making his directorial debut, and producing with David Katzenberg from their producing banner KatzSmith Productions. Reportedly, Grahame-Smith wants to focus mostly on Ray Bradbury's source material from the book. That was six years ago and it has since stalled. I’m not sure how I personally feel about it. Potentially it could be great. Or it could be a great disaster.


Despite the production difficulties and the author’s position on the film (and poor box office reception), it wasn’t all bad. There are many who love it, myself included. The movie won the 1984 Saturn Award for Best Fantasy Film and Saturn Award for Best Writing; it was nominated for five others, including best music for James Horner and best supporting actor for Jonathan Pryce. The film was also nominated for the Hugo Award for Best Dramatic Presentation and Grand Jury Prize at the Avoriaz Fantastic Film Festival.