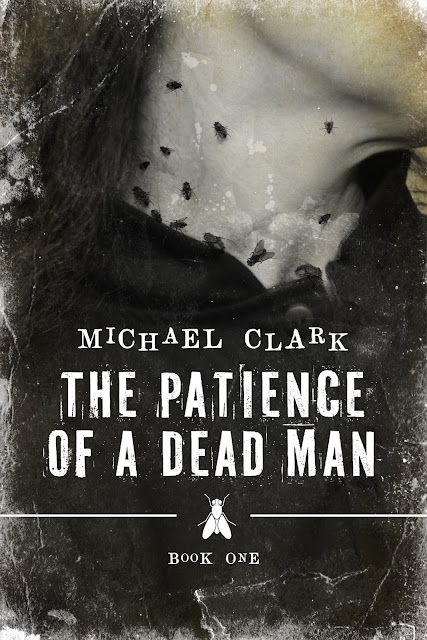 THE PATIENCE OF A DEAD MAN
Michael Clark


Time Means  Nothing to the  Dead He just spent  his last dollar on  a run-down house, but  someone’s been waiting a  long time for this day to  come.


Tim  Russell  bet everything  on a handyman’s dream;  a quaint but dilapidated  farmhouse in New Hampshire. Newly  single after a messy divorce, he plans to  live in the house as he restores it for resale. To  his horror, as soon as the papers are signed and his work  starts, ghosts begin to appear — a bonewhite little boy; a  woman covered in flies. Tim can’t afford to leave and lose it  all, so he turns to his real estate agent Holly Burns to help him decide whether  or not he has any shot at fixing this haunting problem. Can they solve the mystery before  he loses his investment…or perhaps even his life?


The  sun was  low in the  sky on another  perfect New Hampshire  day. Henry Smith had just washed and  brushed his favorite horse just inside  the old red barn. The workday was over  until something caught his eye…something out beyond  the pond, way out in the field. He walked toward the  front of the house and stood there for a few seconds, scanning  the tree line where he thought he might have seen her.


It had looked  to Henry like the  woman they would see  from time to time at the  corner of the property, cutting across  the field into the woods. The closest neighbors  were more than a mile away. Henry knew them, and  this woman did not look familiar.


The  truth was  there was no  explanation why  the woman made frequent  appearances way out here for  the past few years. All of the  neighbors had their own meadows full  of wild grapes and blueberries, not to mention  pumpkins. Why come here? Then he got to thinking:  It was time to select the annual Christmas tree. Why not  kill two birds with one stone? He went back to the barn,  grabbed the hatchet and set off down the front lawn past the stone  wall and headed toward the far left corner of the field. One hundred  yards later, he turned left into the forest.


He had  known about the  overgrown grove since  they bought the place,  but he was still enamored by  it. If this grove had been tended  to over the years, I’d have my tree  already. I’d just chop it down, and after  a relatively short drag back to the house,  I’d be done.


The  grove  started  about thirty  yards into the  wild forest, fully  on Smith property. The  Christmas trees gone wild  had become towering spruce and  of course, too far gone for holiday  use. They were all at least forty feet tall,  more or less, and grew in perfect symmetrical  rows. In and around the grove in odd spots however,  were random wild spruce that could pass for Christmas trees  if you looked hard enough.


Henry  made his  way through  the first few  yards of the wild  forest, and as always,  all at once, the grove opened  up in front of his eyes. He was  fond of this place. It was hidden,  and then it was in your face. And if  you were here, it was yours and yours alone  for the moment, like being lost in the hallways  of an empty mansion. He angled his path to cut through  the many rows, moving diagonally and to the right, deeper into the  woods. Where’d she go?


He passed  more rows than  planned, and before he  knew it, he could see the  man-made symmetry coming to an end  at the border of the congested wild  forest. More and more rogue trees had claimed odd  spots here-- a near-even mixture of man and nature.  The forest floor here wasn’t just spruce needles like the  rest of the grove; leaves from all sorts of trees had drifted  in over the years, leaving piles of natural mulch.


The  briars  were thick,  and behind them,  undisturbed forest.  Nestled inside the briars  and brush were two high mounds  of leaves that had collected for  decades. They seemed artificially high  as if they covered something. At first,  Henry thought it might be a section of stone wall,  but the stone wall in this forest also happened to be  the property line, and he was sure he was still a ways  from that.


As  he closed in,  he realized the  two piles were each  nearly waist-high. A  section of gray stone peered out  from under twisting vines that had  caught years of falling leaves, revealing  something several shades lighter than anything  naturally occurring.


Gravestones,  he recognized.  Thirty-one years living  here and I didn’t know…  He looked down at his hatchet,  wishing it was a pair of pruning  shears. The briars proved well prepared to  protect their longheld secret, but Henry’s curiosity  was powerful. He forged ahead, hacking and flattening  the bases of the sharp plants so that getting back out wouldn’t be  the same battle it was going in.


As  soon  as he  broke through  the last of the  thorns, he put down  the hatchet, dropped to his  knees and began to clear the dead  leaves and ivy. The stones were crooked  from years of heaving frosts but remained  steady as he worked. There was a large one  on the left and a smaller one on the right.


There was  so much moss  they were illegible.  Concentrating on the left  one, Henry scraped gently at the  space he estimated the epitaph would  be. After three or four moments of gentle  effort, he had cleared the top two engraved lines.  The first, in smaller letters, read: “Here lies.” The  second line, where the person’s name should appear, was  taller than the first--but he couldn’t quite make out the inscription.


Then,  a twig  snapped. Henry  looked around, attempting to focus  in the dark; it must be her; time to meet  the stranger. He looked back, down the near-perfect  aisle of spruce. It was all shadows and night had finally  fallen. He squinted and took off his glasses, trying to catch  a better glance.


She  stood  there in  the dark--the  mystery woman in the  long dress. All he could  make out was her silhouette;  her pale white hands were holding  what might be a bouquet, and her hair  was pinned up, worn away from her neck.  It was as unkempt as the woods behind her,  strands and bunches pushing out in odd directions.


And there was  a smell.


There are many  unpleasant odors  on a farm, but Henry  recognized this as the smell  of something unmistakably dead. Like  the time a mouse died inside the wall  of their bedroom. It was decay, and it was coming  from her.