Showing posts from February, 2020
Show all

There are many who agree that the greatest werewolf transformation in cinematic history is An American Werewolf in London. It’s great, no doubt. But for me, hands down the best is The Howling. We can debate that at length. Art is subjective, afterall. I think maybe I am so fond of one over the other because I saw Joe Dante’s The Howling before I saw John Landis’s revered An American Werewolf probably by a few years, though not by much. I was young, so I can’t recall all the details, and that’s not what I’m here to do. No, I’m here now to present to you why the book The Howling by Gary Brandner is on my list of mandatory horror novels you need to read.  I’ll admit, there is no way to separate the book from the film in the public zeitgeist. When you say The Howling to any horror fan of my generation we think about the movie. And really, it’s a good thing. The deluge of sequels that franchise has produced are masterworks in garbage, produced solely to suckle on the teet of
CLICK HERE »

In 5 Days You Will RUN

Run by Blake Crouch For fans of Stephen King, Dean Koontz, and Thomas Harris, picture this: a landscape of American genocide... 5 D A Y S A G O A rash of bizarre murders swept the country… Senseless. Brutal. Seemingly unconnected. A cop walked into a nursing home and unloaded his weapons on elderly and staff alike. A mass of school shootings. Prison riots of unprecedented brutality. Mind-boggling acts of violence in every state. 4 D A Y S A G O The murders increased ten-fold… 3 D A Y S A G O The President addressed the nation and begged for calm and peace… 2 D A Y S A G O The killers began to mobilize… Y E S T E R D A Y All the power went out… T O N I G H T They’re reading the names of those to be killed on the Emergency Broadcast System. You are listening over the battery-powered radio on your kitchen table, and they’ve just read yours. Your name is Jack Colclough. You have a wife, a daughter, and a young son. You live i
CLICK HERE »

Was THE EXORCIST Based on a True Story?

I’m of a generation of kids who watched a movie praised by many to be the “scariest movie of all time” and laughed. My mother forbade me to ever see THE EXORCIST and I promptly set out to do just that. Keep in mind my mother was Catholic. She wanted her children to have a little church, and when church busses came through the neighborhoods in search of young souls to devour she was happy to send us on our way, her home empty of little devils for at least one quiet morning of her weekend. Because that’s what parents want: their children in the safe care of trusted men of God, so as they may sleep-in after a long Saturday night of debauchery.  Nothing inappropriate ever happened there. Unless you count disappointment and broken promises. I remember both my grandmother and my mother telling me I was going to see Jesus at church. They referred to the iconography prevalent of most catholic churches of the day. In a Baptist church? Not so much. In the sanctuary I kept looking around
CLICK HERE »

Terror Abounds at the NIGHTMARE HOUSE

Need a quick horror fix? Low on funds? I got you covered. This one comes recommended by both myself and the venerable Dean Koontz. Nightmare House  (The Harrow Series Book 1)  by Douglas Clegg: In the haunted house called Harrow, no one rests in peace… Claiming his inheritance, a young man unlocks the long-buried secrets of a sinister mansion in this gripping supernatural horror novel. Dean Koontz says this award-winning author’s fiction “can chill the spine so effectively the reader should keep paramedics on standby!” FREE DOWNLOAD!
CLICK HERE »

Was Mary Shelley the Most Influential Horror Author?

San Shearon As a writer of horror, and variations thereof, I am bound to answer the question, “What is horror?” Mandatory Midnight is my attempt at that answer. I was scarred by the genre first by cinema, when (at the age of two!), my family went to see Night of the Living Dead at the drive-in. And as a child there was a local Saturday night creature feature hosted by a disembodied head called Fright Night (long before the movie). The host was underlit by a dim light against a black backdrop. When the show started with its creepy music his head gave the impression it was floating there on your TV. He would say, “Oooo… welcome to Fright Night!” Scared the piss out of me as a five-year-old. It was always a double feature, and they broadcast all the Universal and classic Hammer Horror films. Christopher Lee as Dracula was my favorite. I remember the night Saturday Night Live premiered for the first time because Fright Night had ended. Let’s not talk about my mother lettin
CLICK HERE »

Suicide of a Nation pt 1 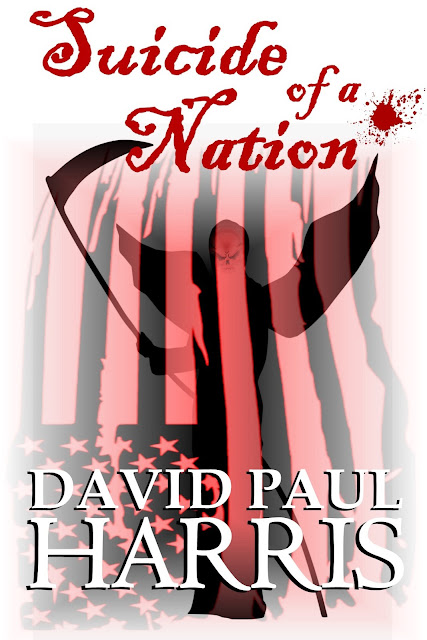 Parables of the New World: A critical examination of the  American Christian in poetic verse The Head of John the Baptist … sat venerated atop a podium in a secret place in a church of the East, its eye sockets vacant, its mouth agape; frozen there in eternal prophecy, calling to repentance. A priest of some import knelt at its base and finished a litany of servile prayers, and then rose to close the sacred case from which the permanent Crier called. No sound had the head made, preserved either by miracle of Providence or miracle of science, since the thing lost its natural mount – but now! The priest whirled round at the guttural emanation of a disturbing groan, his eyes wide with heretical disbelief. Unknowingly, he fell fast to his knees, numb with what he saw forming there in the long-dead prophet’s mouth and sockets; both tongue & eyes took shape. The hair from its scalp grew long-wild and its flesh was re
CLICK HERE »